You tap your brakes and come to a stop in the middle of Floyd Avenue, right in front of six nearly identical modern homes. The design is simple; the effect is startling. Clean, bold lines clearly define the structure. The striking tongue-and-groove cedar siding, a statement on its own, is amplified by charcoal brick and wide windows. And the contrast between these row homes and the red brick one next door, with its white trim and Ionic front porch columns, is a sight to see.

But the story of Citizen 6 is much bigger and more complex than its contemporary exterior or curb appeal. The design is a bold yet intentional nod to the subtle details that make this historic neighborhood such a noteworthy part of the city.

“The starting point for this project was the neighborhood,” says Burt Pinnock, the project’s lead architect. “We paid very close attention to scale and massing, because we wanted to create something that was contextually appealing, both in size and in appearance.”

With that objective in mind, Burt and the rest of the design team—Kevin Jones, Tim Hamnett, and Ben Winn—worked alongside local developer Bill Chapman to develop the design.

“In the beginning, we looked at doing everything from apartments to duplexes, but the idea of building new, single-family homes in the heart of the city’s best, most walkable neighborhood was too appealing to turn down,” Bill says.

Thanks in part to a hospital parking deck across the street, the block wasn’t exactly traditional, which allowed the design team to take a non-traditional approach from the very beginning.

“We looked first to the block’s existing materials palette,” Burt says. “We had to determine how to transform characteristic elements like brick and wood siding into something modern—not a copy.”

To do that, the design team worked to put a contemporary spin on the details: instead of traditional clapboard wood siding, they used tongue-and-groove cedar; instead of historically characteristic red brick, they went with a charcoal hue.

“If you look down street, there’s already an idea about row houses in place,” says architect Kevin Jones. “Instead of jumping out, or disappearing completely, this design seeks to be a good neighbor by speaking the same language as the surrounding homes.” 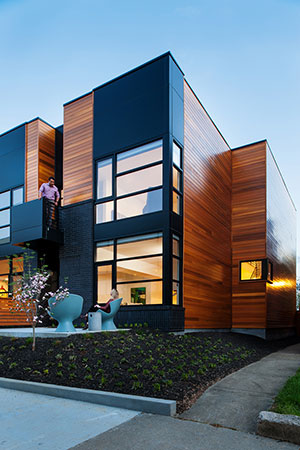 Completed in the spring of 2015, Citizen 6 succeeds in striking a balance between the fine architecture of the past and the present.

Burt compares it to a musical phrase: “It’s kind of like a call and response,” he says. “In a symphony, you might hear a musical note, and then from a completely different musician, another distinct yet complementary note. I think that’s a good metaphor for why this project really works.”

But the design, which received both a stamp of approval from the Fan District Association and a 2015 AIA Virginia Merit Award for Contextual Architecture, wasn’t the only successful aspect of the project. All six homes were off the market before the sheetrock even went up.

All around Richmond, people are recognizing how modern architecture can add to the history and character of the city—something Kelly O’Keefe, who owns one of the six homes, has believed for a long time.

We sat down with him to find out about his deep-rooted love for modern architecture, what attracted him to C6, and what it’s like to actually live there.

1) You were one of the very first buyers—in fact, you signed a contract on the first day the homes were available. What was it that drew you to the project?
My wife Cristy and I previously owned a beautiful mid-century modern house by a lake on Cherokee Road. We loved our old home and have 20 years of great memories from living there, but after our four sons grew up and left, the house started to feel a bit too big for us. We wanted to downsize and move back to the heart of the city.

We didn’t really think we’d find another modern home we loved as much, especially in the Fan District—a creative area that is only beginning to realize that modernism can be a beautiful addition to the stylistic diversity of the region.

A couple of years ago, we had an almost magical call from our realtor, who knew we were stumbling about, looking for something. She said, “Kelly, there are going to be new, modern houses built in the Fan, designed by Burt Pinnock.”

And that was it: in that moment, the things that we cared most about came together. I’ve known Burt for a while, and I certainly know his work. When we saw the drawings for Citizen 6, we connected with it immediately. We hadn’t sold our old house, but we said, “That’s all right. We’re going to figure this out.” 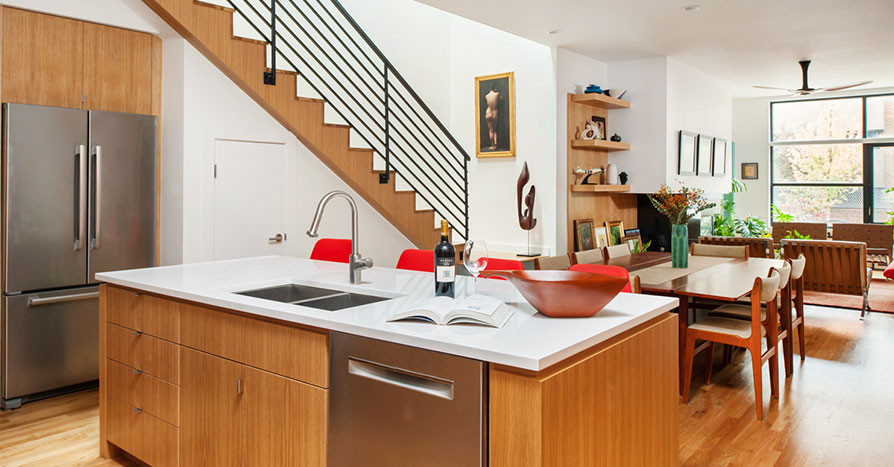 2) You mentioned that your previous home was a true mid-century modern house; you moved from there into a modern design. What does the architecture of C6 “do right” that honors modern design and attracts you to it?
In our old house, there was a generous use of natural hardwoods, with crisp walls and intersecting ceiling planes that made the home feel warm, but open and progressive.

The same is true of our Citizen 6 house. The wood floors and casework are rich and warm. They define transitions between the open rooms beautifully. Wood shelves define the outer reach of the living room, the border between living and dining area, and the stairs between the floors.

Another common element between both homes is the long, uninterrupted wall spans that work so well with our art collection. And while both homes make good use of skylights to bathe the interior in natural light, the Citizen 6 house does this in spectacular ways with two skylight areas—each two stories high—that flank the living space.

I’ve always believed that in art, people don’t mind if you shout as long as you have something thoughtful to say. Burt isn’t afraid to make a bold statement with shape and form, but the use of oak, brick, marble and steel makes you feel you’re in a warm, familiar place. The result is a home that is both modern and surprisingly comfortable. 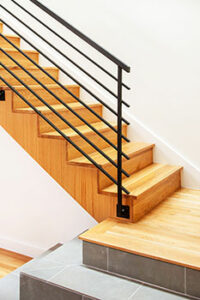 3) What has your decorating process been like so far?
Cristy and I have been collecting modern furniture since we lived in New York over 30 years ago. Some of our furniture was purchased there, and we also bought some of it—the Eames chairs, the Nelson bench—from Metro Modern here in Richmond.

You can’t tell much by looking at the blueprint of this house, so we didn’t really know what to expect in terms of moving our furniture over, but most of it fit. (Of course, our four sons were very glad that it didn’t all fit.) There’s still much to be done; we’ve been very judicious about hanging our collection of artwork.

There’s a wonderful story about Alfred Stieglitz, a gallery owner and a famous photographer. He had a gallery in New York where he showed Picasso, Rodin and Matisse. He also had a second gallery called An American Place with gorgeous architecture and walls.

For many months, no one showed up, because he said, “I love these walls, and if I don’t have artwork that is better looking than the walls, I’m not going to hang it.” So that’s why we still don’t have anything hanging along our stairway, because we haven’t found anything that looks better than that wall looks when the sun is coming down on it. 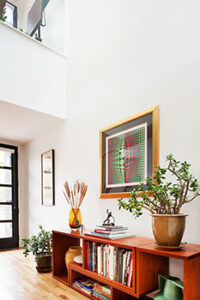 4) What do people say to you when they find out you own one of these homes?
There is always great curiosity and surprise when someone learns we live at Citizen 6. When a client of mine found out that I lived there, she stopped our meeting to talk about how much she loved the homes and wanted to come and see the inside.

This is really the most typical reaction. There’s a wonderful community of modern design lovers in Richmond, and the word spreads fast when a new work of architecture comes onto the scene.

5) The project received a lot of press for being a modern interpretation of the neighborhood. What is your take on that conversation as the homeowner, someone living in and enjoying the space on a daily basis?
My wife and I have always loved the neighborhood around Floyd Avenue because of the generous sidewalks, abundant trees, sociable front porches and the eclectic array of architecture. The homes are similar in scale and materials, but they present a patchwork quilt of architectural styles, colors and textures. This makes the experience of walking along Floyd a feast for the eyes, and it’s a great way to see neighbors on their porches or walking their dogs.

We love sitting on the front porch with a glass of wine on a warm evening, and we always hear from folks who love the homes as much as we do. The splash of modernism fits in beautifully with the tapestry around us, and the neighborhood has begun to take pride in the progressive addition to the bustling street. 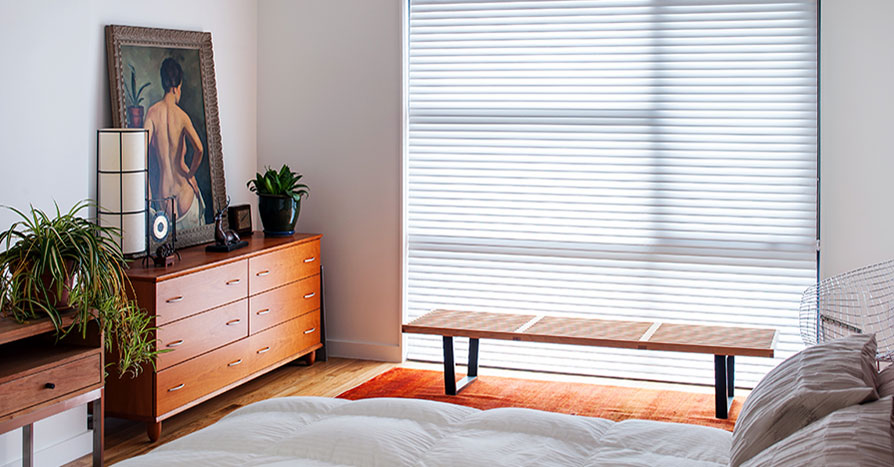 As a community, we need to patronize artists and architecture, and that’s something that Cristy and I have cared about all of our lives. The Citizen 6 homes sold before they were built to people like us who didn’t need to wait to see a shovel going into the ground to commit. To me, that says there’s a market for great modern architecture in this town, and we’re fortunate to be on the receiving end of that.