Rethinking Art in the Workplace

Da Vinci’s Mona Lisa. Michelangelo’s David. Raphael’s School of Athens. Van Gogh’s Starry Night. You don’t have to know much of anything about art to think of a few great works hung in museums and described in textbooks, masterpieces that went down in history and became household names.

What you might not realize is that art doesn’t have to be legendary to change the way you see the world. Art has the capacity to set the tone of a room or shape way you interact with a space—whether you’re aware of it or not.

If you’re inclined to see art as an afterthought, more décor than declaration, think again: the pieces hanging in your office make a statement about your company, your culture, and the mission that drives your work.

More than 80% of employees believe that art is important in work environments for a bevy of reasons, from boosting creativity to decreasing stress.

But beyond bringing color to the walls or increasing employee productivity, artwork leaves an impression. It sparks thought, activates emotion, and draws attention.

For one Richmond company, that bit of knowledge played a pivotal role in the recent renovation of their headquarters. From the beginning of the project, the client knew that they wanted their artwork to tell their story, one closely intertwined with the culture of the city. The hard part? Hunting down local photographers, sifting through their portfolios, and pinning down shots that expressed the company’s culture and identity.

Gillian, an avid photographer since the age of six, was up to the challenge. “My whole life, I’ve always been the one with the camera, whether I was on a field trip or at a party,” she says. “When I got a smartphone, Instagram became an outlet for my photos—my dog, old buildings around town, cool textures, and funny signs.”

When it came time to start the selection process, Gillian’s experience with Instagram was a definite plus. “We decided on a square format in a number of different sizes. Since photos posted to Instagram are automatically cropped into squares, I realized that the platform would be a great place to start looking for local photographers I didn’t already know.” 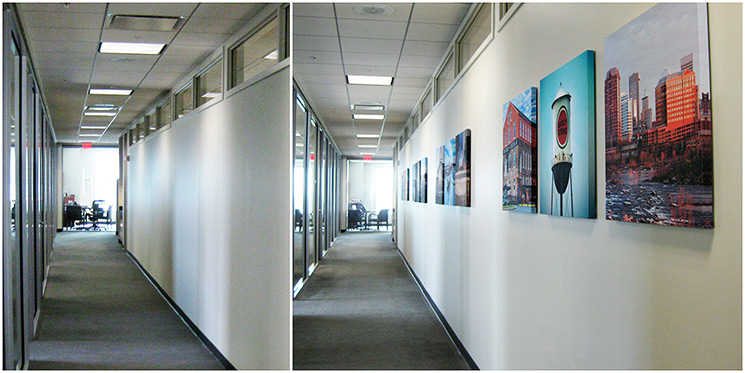 She spent a lot of time scrolling through various Instagram feeds, compiling a large stack of prospective photos, before sitting down with the client and sorting through the images to earmark the shots they liked best.

“I was familiar with a lot of the places featured in the photos, but there were also some spots I didn’t know. I would pull up a certain statue or monument, and the client would ask, ‘Oh, where’s that?’ And then we would start talking about it. We realized that these pieces were going to do a lot more than just add color to the space or showcase places in Richmond; they were going to spark conversations all over the office.”

From there, Gillian went through the photos in the “yes” pile, contacted photographers about purchasing prints, and worked with the printer to create proofs—in this case, to-scale strips of each photo—for the client. She knew from personal experience that quality and resolution would play a crucial role in how the photos looked when printed on a large canvas (some as big as five feet by five feet). The final step in the process was to take the photos and figure out where they would be featured. “It was a puzzle: what should someone see when they enter the lobby? What’s the right fit for the corridors? What should hang near the offices? The client wanted this to be a recruiting tool, so we were strategic about the where and how we placed certain pieces.”

For Gillian, the project was exciting on two levels: as a photographer and as a designer. “For this particular project, I would see a location in a photo and say, ‘Oh, I haven’t been to that park,’ and I would get inspired to go there and take my own photos. But as a designer, it was a great opportunity to set the tone of the company’s space and leave a lasting impression on their recruits, clients, and employees.”