The Henry Ford, Spaghetti-Inspired Process that Makes Your Trips to the Doctor Better

That may sound like a lot of mumbo jumbo jargon, but it’s actually a very cool achievement with an intriguing back story and even more intriguing implications for the healthcare world.

Let’s break it down, shall we?

What exactly is this Lean Six Sigma thing?
Both Lean and Six Sigma are methods that seek to get rid of waste and make things more streamlined. They are complementary concepts, which is why you usually see them together even though technically they are different.

The biggest difference comes from how each is implemented. Lean is a management concept, so it focuses on removing unnecessary steps. Six Sigma is more of an improvement process, so it focuses on making the steps already in place better than they are.

The Lean Six Sigma concept as a whole is based on one really important question: Would a customer pay for this? Any part of the process that a customer would deem unimportant is then considered wasteful and should be eliminated. And in the healthcare world, that’s a big, sticky question.

So what does having a Black Belt mean?
Being a Certified Master Black Belt means you can karate chop some serious waste. It’s the second-highest designation in the Lean Six Sigma World, behind Champions.

For John, specifically, it means he’s working with other Lean Six Sigma leaders to design healthcare spaces that are highly functional and streamlined but are still compassionate, caring facilities that promote healing.

How did this crazy stuff get started?
Lean has roots in the industrial sector—it got its start with Henry Ford, who integrated his entire production process and became famous for the assembly line. The hitch? This process only allowed for one variation of the Model T.

Then, in the 1930s, Kiichiro Toyoda (who would later become the president of Toyota Motor Corporation) saw opportunities to tweak Ford’s production process in ways that would allow for variations. This would become the Toyota Production System, still in use today.

Sometime in the 1980s, these concepts took off as a management philosophy that many different sectors, including healthcare, used to make things work better, faster, and stronger.

Why is it still a thing in 2015?
Today, it’s about bringing the voice of the patient into the healthcare design process. Again, we go back to the main question: Is this something a patient would want to pay for? For instance, is a waiting room really the best use of space, or should we eliminate the idea of having to wait altogether? If we do that, then how do we thoughtfully guide a patient to a doctor without a waiting room?

A lot of these discussions take place in the programming and planning phase, when our architects are working with hospital and facility owners to map out the best use of a space. Healthcare designers who are Lean Six Sigma certified become advocates for the patient in these conversations, always pushing to make sure every nook and cranny, every hallway and nurse’s station are perfectly aligned and in sync with one another.

Ok, I’m starting to understand a little better, but give me an example.
One way healthcare designers “see” waste is by using a spaghetti diagram. Flow patterns get traced on a floorplan, which ends up looking liking a bunch of colorful noodles. 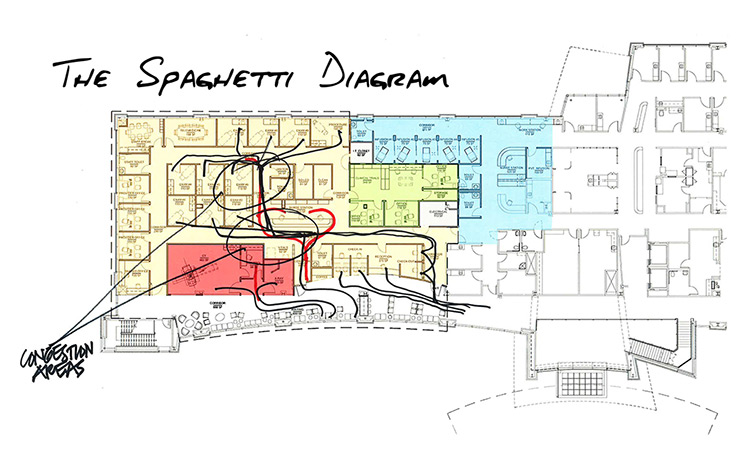 What you’re looking at here are paths taken by doctors, nurses, technicians and patients in an oncology clinic. By mapping the activity, we can actually see where congestion points exist—near the nurse’s station and exam rooms—which then helps us as designers figure out how to map out a better solution so patients are getting the best experience possible. At its core, that’s what Lean Six Sigma does.

Congrats to John for his hard-earned achievement!